The Holland Onion Association (HOA) forms part of the Fresh Produce Centre. The Fresh Produce Centre consists of various committees, including the Onion Trading Committee (Comité Uienhandel), which internationally presents itself as HOA. As of 1 January 2015 the Dutch Product Board for Horticulture was terminated, which resulted in the cancellation of the mandatory levy and collective promotional activities for the onion sector. During the Members meeting of the Onion Trading Committee at the end of 2012, a unanimous decision was taken for the members to pay a collective contribution for the promotion of onions as part of Fresh Produce Centre membership. This includes activities for the entering of markets in third countries and collective promotion, but also fundamental research into pests and diseases, fertilisation and starting material. All seed companies are now also participating in the research program. The International promotion is realised under the collective ‘Holland Onions’ trade mark.

The Onion Trading Committee operates at an international level under the name of the Holland Onion Association (HOA). Being a member of the Fresh Produce Centre means being a member of an organisation that has the power to promote the Holland onion in as many countries in the world and to gain access to the markets of new countries, as recently realised in Indonesia and Panama. Members also benefit from the access to a network of chain partners and quality research across the sector. Numerous innovative projects are being set up, such as the recycling of onion peel as biomass and the extraction of quercetin and colouring agents from the outer layers of the Holland onion, research into dust reduction in the workplace and many other research activities. The Fresh Produce Centre also provides Holland onion traders with access to collectively drawn up data, such as export figures, acreage and market analyses and have access to an independent source of information on all the relevant aspects of legislation. 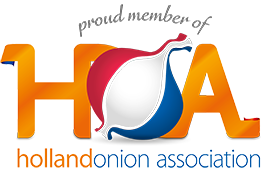