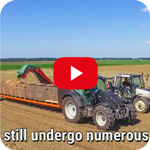 The process of curing, loading and storing of the new Holland Onions for the season 2017-2018 is in full swing. It isn’t always easy, considering the enormous amounts of water that fall from the Dutch skies this early autumn. After all, the wetter the windrow, Read more »

If we look ahead to for example the year 2050, in which 10 billion people will consume on average 15 kilos of onions per capita, then it is safe to assume that around 2 million tons of onions will be exported from the Netherlands. A Read more » 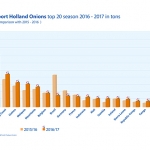 The previous export record achieved in 2015-2016 has again been broken in this past season. At the end of the season 2016-2017 the counter stood at almost 1.1 million tons, an increase of 4%. And no less important; the number of countries where the Holland Read more »

The summer holidays might still be fresh in our memories but the new export season has already started.  A season devoted to new challenges and excellent prospects for our industry.

Research and innovation are tremendously important to us to maintain our pole position as the world’s most important onion country. And so we have launched a partnership unlike any other in the world for a chain-wide onion research program. To provide our producers with even more knowledge and tools to ensure that the export quality of the Holland Onions remains superior. By now this unique joint venture has been given an equally unique name: Uireka. A nice play on the enthusiastic exclamation used when a difficult problem is solved with a truly original solution.

The theme of this newsletter rightly focuses on the unique freshness of our Holland Onions. A year-round, constant freshness which, despite the lagging demands from Brazil, has yet again translated into a new export record of no less than 1,1 million Dutch onions. On top of that our Holland Onion has found its way to as many as 130 countries! A great compliment for the entire Dutch onion chain, if you stop and think about it. Yet again proof that our quality is our greatest asset.